Banking and currency
The currency used is the Vatu. Although Australian dollars are accepted by many shops, restaurants and hotels in Vila, and a few in Luganville (Santo), they are NOT readily accepted outside of town or throughout the islands. Daily fluctuations occur, however you should work on the following approximations; 100 vatu = AU$1.30.

Dining
Dining is a highlight of a visit to Port Vila.

Entry Requirements
For stays not exceeding 30 days, visas are not required by nationals of Commonwealth countries, EU countries, USA or Japan. However you must have a valid, ongoing or return airline ticket and your Passport must be valid for six months beyond your intended stay.

Health
No vaccinations are required, however, anti-malarial medication is highly recommended. Please consult your doctor well in advance of your departure.

Shopping
Shops and tour operators are generally open Monday to Friday between 7:30am and 4:30pm/5:00pm, but close between 11:30am and 1:30pm for siesta. (Eating places, banks, supermarkets and the Post Office do not observe siesta.) Most shops are open on Saturday mornings and some on Sunday mornings. The markets in the town centre are open daily (except Sunday) and sell fruit, vegetables, flowers, and handicrafts.

Transportation
Driving is on the right-hand side of the road. There are no public transport systems in Vanuatu. Privately owned mini buses are common and run unspecified routes through the municipal areas. You need only board one heading in approximately the right direction and tell the driver where you wish to stop and you will get there, albeit by a circuitous route! The fare is 100vt per trip within the town centre and 200vt to the outskirts of Port Vila. Taxis are also plentiful and relatively inexpensive.

Tipping
Neither tipping nor bargaining is considered civilised behaviour. If you would like to express your gratitude for service, you might like to send a postcard or perhaps give a ‘t’ shirt as a gift from your country. It is neither necessary, nor expected, but such small items are received with much appreciation.

Time
Vanuatu is one hour ahead of AST (Australian Standard Time) and 11 hours ahead of GST (Greenwich Standard Time or UT). There is no daylight saving in summer.

Water
With little industry or agriculture and no unusual water borne bugs, the town water supply is considered safe to drink. In the outer islands, water is collected from streams whose catchments are untouched jungle, or as rainwater from roofs. Bore water is less common but safe to drink throughout. However some people react to water in different places simply because it’s different. If you fall into that category, bottled water can be readily purchased from Vila and Luganville. Supplies in the outer islands are very limited.

RECEIVE THE LATEST SPECIAL VIA EMAIL 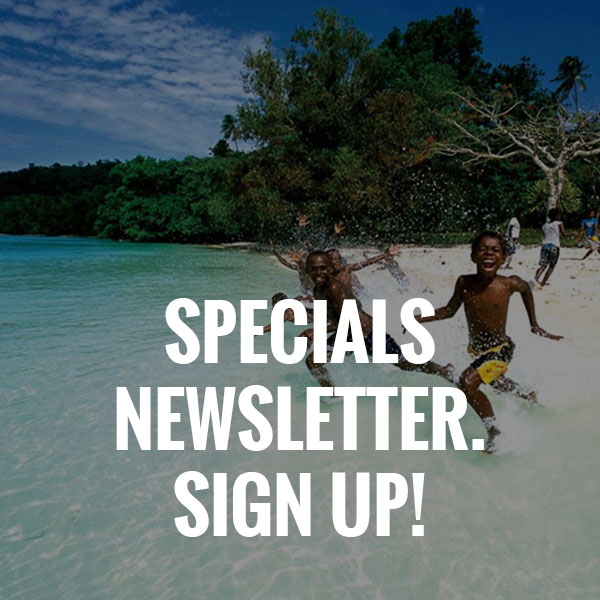